This summer, Dr. Philip J. Williams is stepping down from his role as director of the Center for Latin American Studies. 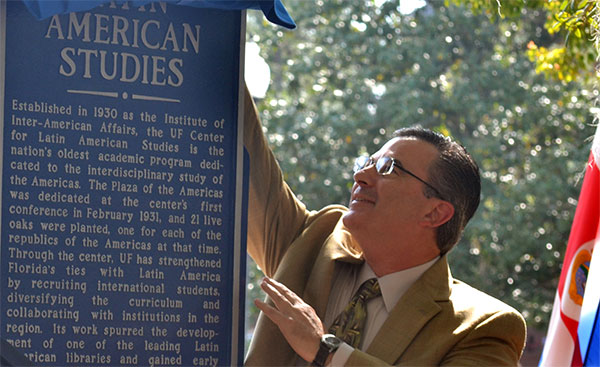 Throughout his ten-year tenure as Center Director, Williams expanded cross-campus collaborations, working with 51 different departments and growing core and affiliate faculty numbers from 163 in 2009 to 222 in 2019. He oversaw the hiring of eleven core faculty members, including Dr. Joel Correia, Indigenous Studies specialization coordinator, and Dr. Tanya Saunders, Gender, Sexuality and Racialization specialization coordinator.

During his first year as Director, and in collaboration with the Center for African Studies, Williams helped launch the Master of Sustainable Development Practice (MDP) program. He also oversaw the hiring of Dr. Glenn Galloway, current director of the program. “Phil has been an ardent supporter of the UF MDP Program every step of the way,” said Dr. Galloway. “As a result, the program has been strengthened and a considerable list of young professionals have benefitted directly from the generous support of the Center for Latin American Studies. I am forever grateful for Phil’s interest in and commitment to the UF MDP Program.”

As Director, Dr. Williams successfully wrote three Title VI and Foreign Language and Area Studies proposals, making the Center for Latin American Studies the only center continuously funded by Title VI since 1963. In 2015, as a result of a $273,000 grant from the U.S. Embassy in Panama, Williams in collaboration with MALAS alum Osvaldo Jordán implemented a project titled Equal Justice for all in Panama: Supporting the Transition to the Accusatory System in Rural and Indigenous Communities. In 2016, Williams oversaw the development of a new strategic plan for the Center, which outlines multiple goals including increasing faculty preeminence in research and teaching and continuing to provide outstanding interdisciplinary academic programs.

“Over my years as TCD Director and in the Center for Latin American Studies I cannot possibly count the times that Phil has generously provided key advice, guidance, direction, support, and encouragement for TCD and our activities,” said Dr. Bette Loiselle, director of the Tropical Conservation & Development program. “His knowledge of UF, his incredible relationships across campus and with senior level administrators, and his willingness to step forward on behalf of TCD programs, faculty, and students have helped us tremendously as we pursued new initiatives and strengthened existing programs, as well as helped us bridge funding for key individuals as needed. A more recent example was Phil's instrumental role in working with VP-Research David Norton and President Kent Fuchs to develop our newest grant from the Gordon and Betty Moore Foundation. I have learned so much from Phil over the years and I, personally, and TCD will miss him greatly!”

On behalf of the faculty, students, and staff at the Center for Latin American Studies, we thank Dr. Williams for his hard work and dedication to the Center and its constituents. If you would like to show your support and gratitude to Dr. Williams, he has requested that donations be made to the below Center funds.