Habitat loss and overhunting synergistically drive the extirpation of jaguars from the Gran Chaco. 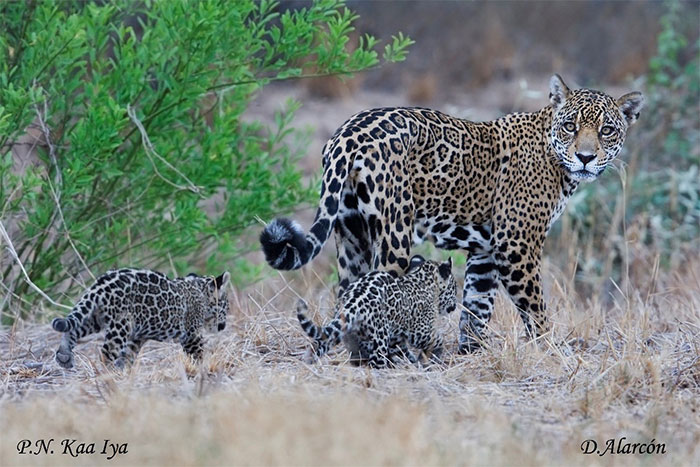 Photo legend: A female jaguar with her cubs in the Bolivian Gran Chaco. Photo: Daniel Alarcón

Jaguars have lost a third of their key habitat – an area equivalent to half the state of Florida – in South America’s largest tropical dry forest since the 1980s. A new study, led by researchers at Humboldt-Universität zu Berlin (HU), used a novel approach to reconstruct three decades of jaguar habitat change in the Gran Chaco forest. The study finds that deforestation and overhunting are to blame for the dramatic contraction of habitat for this iconic big cat. However, the study also highlights that jaguars can be saved in the Chaco if countries swiftly coordinate to protect the remaining key habitat patches, most of which are found along their international borders.

The study, led by Alfredo Romero-Muñoz from HU Berlin’s Geography Department, evaluated changes in jaguar habitat from 1985 to 2013 across the entire 1.1 million km² Gran Chaco ecoregion – a tropical dry forest three times the size of Germany and extending into Bolivia, Paraguay and Argentina. The Gran Chaco has become a global deforestation hotspot due to agricultural expansion to produce beef and soybeans, which in turn are used to feed pigs, chicken and cows in places like Europe and China. The expansion of croplands and pastures promotes deforestation, and puts further pressure on wildlife because hunters have easier access to previously impenetrable forests. To make things worse, unlike other biomes such as the Amazon rainforest, less than 10% of the Chaco is protected for nature.

Romero-Muñoz collaborated with researchers from across the Chaco, including Andrew Noss from the University of Florida, examining how deforestation and hunting have interacted to reduce jaguar habitat since 1985. “Our study indicates that three million hectares of key jaguar habitat were lost to agriculture and converted to either pasture or cropland”, Romero-Munoz explains. “However, hunting pressure on jaguars expanded over an even larger area of seven million hectares in the same time period, and both threats now act together in a third of the remaining jaguar range. Jaguars are mainly hunted by cattle ranchers and given the expansion of cattle ranching in the Chaco, the risk of being killed is rapidly increasing for jaguars. Jaguars are particularly vulnerable to hunting because they occur at very low densities and have to move over huge areas.” He fears that jaguars may be at higher immediate risk of disappearing from the Chaco than previously thought, and that they are likely already extinct in many parts of the ecoregion. This is concerning because jaguars are important for healthy ecosystems in the Chaco.

The research also found that larger protected areas were more effective in maintaining high-quality jaguar habitat than smaller ones, but highlights that 68 % of the remaining key habitat remains unprotected. “Small protected areas lost jaguar habitat, either because forests were converted inside them, because hunters penetrate protected areas, or because jaguars are killed when they leave the reserves”, Prof. Tobias Kuemmerle, who leads the Conservation Biogeography Group at HU Berlin and is a co-author of the study, explains. “But the jaguar in the Chaco can be saved. Our results point to the importance of remaining habitats along international borders.” In the eyes of the researchers, countries should cooperate to protect these border areas in order to prevent the imminent extinction of jaguars from the region. “Our maps can inform us where conservation actions to save the jaguar should take place”, Kuemmerle highlights. 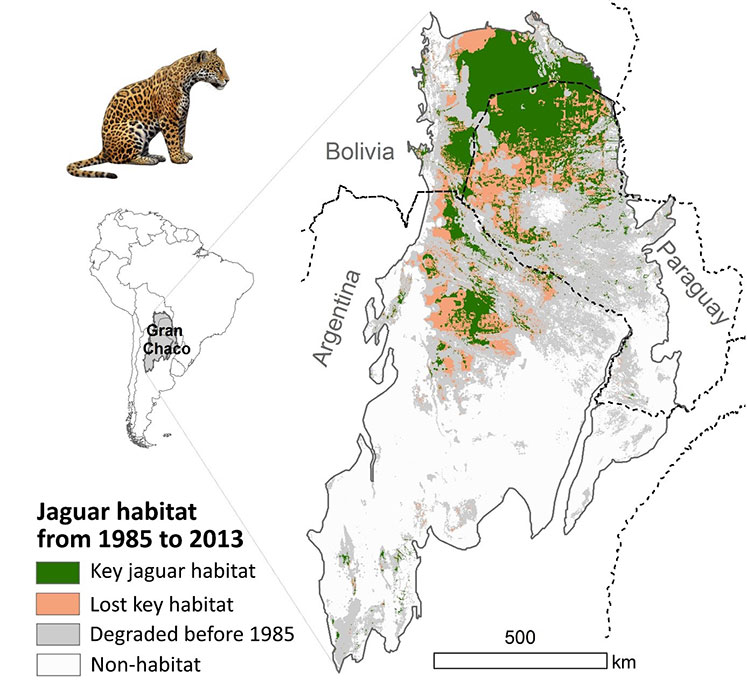 Map legend: Jaguar key habitat in the Chaco declined by a third between 1985 and 2013 due to the expansion of agriculture and hunting pressure.

What can the rest of us to do help save this emblematic large cat? Romero-Muñoz says that “in this increasingly interconnected world, what we eat can have an impact in far-away regions. Much of the beef produced in the Chaco is exported to Europe and Asia, and soy produced in the Chaco is also exported, mainly to feed animals. Therefore, a way to reduce our potential impacts on jaguars may be to reduce our individual consumption of meat, especially beef.”

Habitat loss and overhunting synergistically drive the extirpation of jaguars from the Gran Chaco
Manuscript accepted for publication in Diversity and Distributions.

Further Information
Link to the study