Discipline and Develop: Destruction of the Brazil Nut Forest in the Lower Amazon Basin

The Brazil Nut Forest once covered 20,000 km2 in Southeastern Pará, but today's last remnants are limited to the Vale Rio Doce Mineral Company’s legal Forest Reserve. The once majestic Brazil nut tree stands isolated, a burnt silhouette against a backdrop of sprawling pastures and small farmer settlements, a lasting memorial to the region’s endemic violence.

Amazonian deforestation continues to concern the world community, especially as the Initiative for the Integration of the Regional Infrastructure of South America (IIRSA) begins to displace indigenous peoples and traditional communities. While the narrative surrounding the loss of Amazonian ecosystems is often framed as the penetration of capitalist relations into a resource frontier, research carried out by Dr. Cynthia Simmons (UF Department of Geography) and Dr. Robert Walker (UF Center for Latin American Studies and Department of Geography) brings new evidence to light. With a case study of the Brazil Nut Forest (BNF) in the Lower Amazon Basin, they expose how the Brazilian Armed Forces hastened the process of “land creation” in helping develop an agricultural economy, destroying the forest as they waged a dirty war against poverty-stricken peasants and Maoist insurgents. The BNF once formed an integral part of Amazonia’s extractive economy by providing Brazil Nuts to the world market. But rapid conversion, initially driven by fiscal incentives and later by covert militarized assaults, reduced forest cover in the area from 97% in 1973 to less than 14% in 2009. Unless something is done to mitigate the process of “land creation” at basin scale, now accelerating under IIRSA, Amazonian forest loss will desiccate the region, killing the economy now replacing the trees.

In 1960, President Kubitschek initiated a road-building plan to link the Amazonian periphery with the economic core of Brazil. This set in motion waves of investment and migration, and precipitated a conflict between the camponês, smallholders who transform patches of forest into farmland, and takers, large landholders and ranchers who use force to seize land from the camponês for economic gain. The military regime (1964-1985) followed Kubitschek’s initiative with its own infrastructure program meant to “bring a land without people to a people without land.” However, recently declassified documents from Brazil’s Armed Forces, the National Truth Commission, and the Central Intelligence Agency, reframe the military’s push to develop the Amazon basin as a glossy explanation meant to conceal combat operations being carried out against the Maoists of the Communist Party of Brazil (PC do B).

In the late 1960s, the PC do B launched what they hoped would become a people’s war to counter the brutality of the military regime, under which hundreds if not thousands had died. They selected the BNF as their base of operations because it was concealed by dense canopy forest and lacked highways. Finally aware of their presence in the early 1970s, the military government declared the BNF and its environs a national security zone and, under orders from President Médici that the revolutionaries all be killed, launched a campaign that came to be known as the Guerrilha do Araguaia or the Araguaia Guerrilla War (1972-1974). To accommodate their operations, the military built roads through the BNF, opening it to an influx of capital and facilitating the seizure of land by takers and its conversation to cattle ranching. Although Amazonian scholarship generally asserts that the military regime built the Transamazon Highway to open the region to development and to secure international borders, Simmons and Walker argue that this was primarily a tactical move to give the Armed Forces access to the hidden guerilla bases. The nation-building justification for why the military built a road with seemingly little to commend it came after the Araguaia Guerilla War. 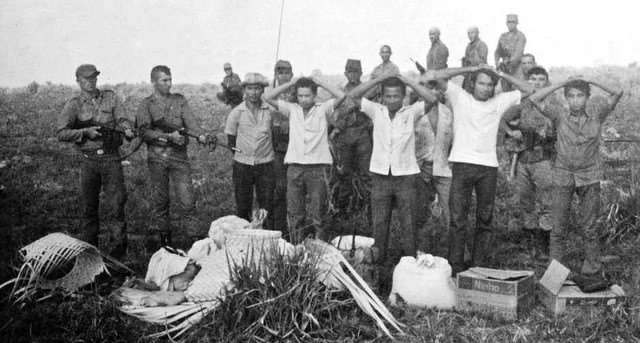 “Peasants detained on military bases and other inhabitants of the region described in consistent detail the procedures the State agents employed to hide evidence of their atrocities, … helicopter transport [to the base of operations] of detainees killed or about to be executed … cutting off heads and hands and the abandonment of their bodies in the woods.”
CNV Archive, 00092.002613/2014-11. CNV Deposition on September 16, 2014.

Destruction of the BNF provides insight into the development of Amazonia’s agricultural economy. The irony is that this economy, founded on the basis of a massive “land creation” process and fortified by the disciplinary force of Brazil’s military dictatorship, is now vulnerable to continued land creation, the likely result of IIRSA. Brazil’s continued push for economic development, coupled with increasing demands for Amazonian commodities, exacerbates deforestation rates given the need that more land be brought under production. But there is a limit to deforestation beyond which rainfall recycling breaks down and with it Amazonia’s moist environment. Thus, Amazonian agriculture could be destroyed by its very success. The fate of the Amazon is even more uncertain in light of Brazil’s newly elected populist President, Jair Bolsonaro, who advocates a return of military rule. Bolsonaro has also made clear his intention to abolish environmental regulations, protected areas, and indigenous reserves to clear all obstacles to economic progress. IIRSA conforms well with his vision of the Amazon’s future.

“Discipline and Develop: Destruction of the Brazil Nut Forest in the Lower Amazon Basin” is published in The Annals of the American Association of Geographers (DOI: 10.1080/24694452.2018.1489215). The article may be accessed at the following permanent link: https://doi.org/10.1080/24694452.2018.1489215. Funding for the research was provided by the National Science Foundation (Geography and Regional Science), the Inter American Foundation, the Latin American and Caribbean Environmental Economics Program, the University of Florida Department of Geography, and the University of Florida Center for Latin American Studies.