This article was originally published in the Fall 2021 edition of The Latinamericanist. Read the whole issue here, or scroll below.

In 2019, just as Treethep (Pepe) Srisa-Nga was beginning his MALAS degree, the Center for Latin American Studies was welcoming a new director, Carlos de la Torre. This timing would turn out to be fortuitous for them both, as Srisa-Nga's interests aligned exactly with De la Torre's expertise: populism. What began as a mentorship resulted in a partnership; the two co-authored the book "Global Populisms," published by Routledge Press in 2021.

Q. How did this project come about for you two?

SRISA-NGA: I was so excited when I learned that Carlos was coming to be the new director because I had read his works before. I'd been really interested in populism, and when you look at the literature on Latin American populism, his was one of the names that would appear. Eventually, I took his class, and I was assigned to him as his student assistant.

DE LA TORRE: After I edited the Routledge Handbook of Global Populism, they asked me to write a textbook and I accepted, but I asked for some time. There was a lot of information I didn't know because the scope was international. I had met Pepe, and for me it was very exciting to learn he was interested in populism. When he took my class, he was such a brilliant student that I had the idea: why not ask Pepe to write the chapter on populism in Asia? And we started having conversations, and he would bring perspectives that are new for me, and so I said, "Why don't we become co-authors?"

Q. How is "Global Populisms" different from other books on populism?

DE LA TORRE: One thing that is a bit different is that both Pepe and I come from the Global South. Many books on populism are Euro-centric. So for us, it was important to look at places where populism has been in power. Latin America, for example, is crucial to understand what are the effects of populism.

SRISA-NGA: We tried to cover the different manifestations of populism around the world, not just any specific region. We cover Europe, the U.S., Latin America, and parts of Asia and Africa as well. These different experiences of populism throughout the world, particularly in the Global South, complement our broader understanding and definitions of the term.

Q. The audience for this book is the general public. Why was it important for you to write to that audience?

DE LA TORRE: We wanted to appeal to people that are interested in the topic but they're not necessarily academics. Only a few years ago, the topic of populism was confined to the hands of a few experts, and mainly historians.

And you know, Pepe and I were both raised in dictatorships [in Thailand and in Ecuador, respectively]. So we know the value of democracy. When you experience dictators, you value the freedoms that go with democracy: freedom of the press, freedom of expression, freedom of association.

SRISA-NGA: That's true. We have that kind of moral obligation to defend democracy, not only in the face of military dictatorship but also in the face of the regime that claims to speak in the name of the people. 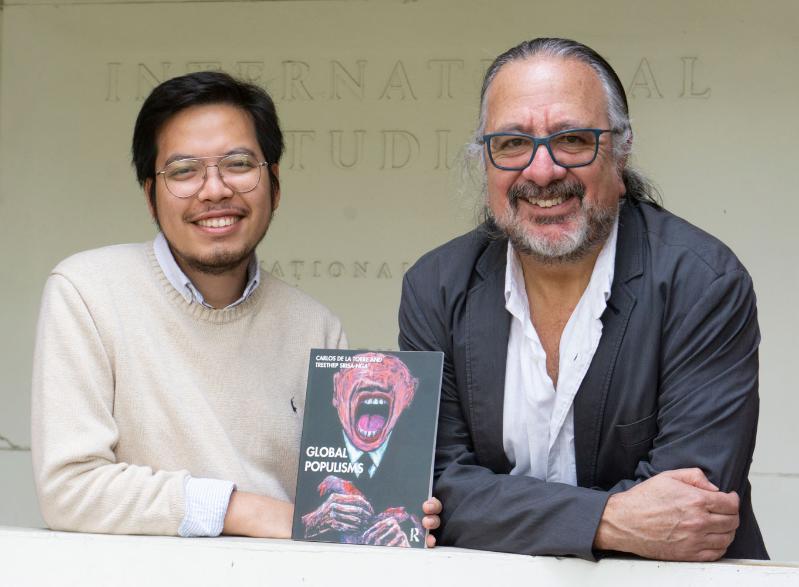 Q. Why is populism a relevant and timely topic?

SRISA-NGA: We are witnessing a number of cases where we're seeing the erosion of democracy, not the breakdown of democracy by military coups, as in the past (although there are some cases). That kind of abrupt death of democracy is not as common in global politics anymore. Instead we're seeing the gradual attempt from populists to overhaul and manipulate democratic systems, institutions, and practices. We need to be aware of it.

Q. What do you want readers to understand about populism after reading your book?

SRISA-NGA: For me, it's the inherent relationship between populism and democracy. What Carlos and I have put forth in this book is to insist that populism is indeed part of democracy. If these leaders come from democratic elections, and if these leaders appeal to the people through critiques of the existing institutions, then there is something wrong with the existing current conditions of democracy. If you want to live under democracy, you have to find sustainable ways to fix those gaps in our existing democracy and not let populists exploit them and erode it.

DE LA TORRE: The media tends to portray populist followers as irrational or uneducated. They're treated like an anomaly, suggesting that populism comes from nowhere. But like Pepe said, populism exists when there are failures in democracy. And populist critiques of existing democracies are real. You have huge levels of inequality, people don't participate, people don't feel like they're being represented by the political parties. We have to take that very seriously. But the problem is in the solutions the populists offer. They assume that there are quick fixes, and they will fix everything. They assume that a politician is the savior of the nation, and that the people must trust in his persona more than in ideology. Then this person begins to pick up enemies: traditional politicians, the media, social activists—anybody who is critical of them. And then they start to create atmospheres in which you cannot have democratic conversations.

SRISA-NGA: Yes, these are not healthy conditions for democracy to flourish.

Q. How did you both benefit from this collaboration?

DE LA TORRE: I hope I can continue to collaborate with Pepe on book chapters or articles because this was a fantastic experience for me. I learned a lot from him. When you start a collaboration like this, it's not always easy to find somebody with whom you can work so well.

SRISA-NGA: I thank Carlos so much for extending this opportunity for a student to co-write an entire book with him. It's such an excellent opportunity for me to step up into the English-speaking academic world. And I think this is something that should be encouraged between faculty and students, if the academic and research interests align. There are many good academics who are quite established, but not every one of them is generous enough to invite students with less experience to co-author with them.

DE LA TORRE: That's what academia is all about. It's a craft. When you're a student, you're learning to become someone who writes books. There's a craftsmanship to it. And it was great that I was able to show Pepe what I know, not because I know so much, but because I'm older and have been doing this for a long time. And the collaboration works both ways; Pepe was seeing things in ways that I was not seeing, from different angles. It was a pleasure to work with him. ◆