Dr. Mora served as the Bacardi Family Eminent Scholar at the Center in the Spring 2022 semester

This article was originally published in the Spring 2022 edition of The Latinamericanist. Read the whole issue here, or scroll below. 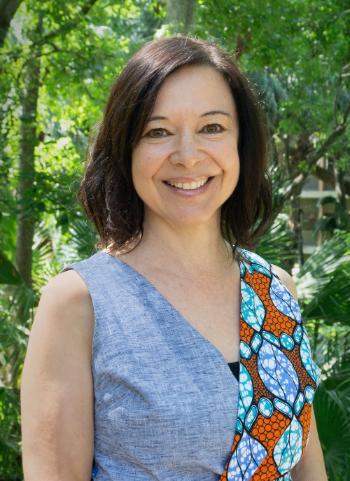 Talking to Dr. Mariana Mora about her scholarly work, she says she likes to engage in a kind of “porous academia” – one that isn’t solely dialoguing within the bounds of the academy, but rather participating in a kind of outward exchange with human rights organizations, social movements, and so on. The phrase came to her in an instant during a conversation with Center affiliate professor Richard Kernaghan, when they were collaborating on the ethnography conference in March.

“I find it useful because it helps articulate how I make my work grounded,” she explains. “I focus on the embodied knowledge and the politics of the everyday. When I talk about politics, I don’t refer just to the big marches or the demands to the state, but rather I am interested in that which is low volume, low decibel, so imperceivable that sometimes we don’t register them yet they generate other possibilities and alternative understandings.

This practice of intensive listening to understand complex social phenomena is a result of Dr. Mora’s training as a social anthropologist. She is an associate professor and researcher at the Center for Research and Advanced Studies in Social Anthropology (CIESAS) in Mexico City, visiting the Center this semester as the Bacardi Family Eminent Scholar. “One of the things I find fascinating about anthropology and ethnography is that it puts in dialogue aspects of social relations that on the surface may seem very disparate,” she says. “But if you’re looking at it from embodied knowledges of those affected, all of a sudden they become visible and point to aspects of social phenomenon that form part of the undercurrents.”

Dr. Mora applies this approach to her research, which focuses primarily on Indigenous movements, racism, state violence, and colonial structures of power, informed by her background in decolonial feminist theory and centered on identifying violence and justice. Often, exploring invisible intersections in those contexts results in an illumination of structures of power that would otherwise remain hidden. And in many cases, those power structures are not just invisible but silent – and silencing.

“There are slower violences and apparently more imperceptible violences,” she explains. “The media and the state tends to focus on spectacular forms of violences, and everything else gets systematically silenced. But these violences affect everyday life, they are immersed in racialized and gendered structures of violence and hence influence strategies of justice. You have to name violences in order to strategize forms of justice, and in Mexico there is very little discussion around how racism and gender intersect with different forms of violence. My work seeks to name both.”

A sense of justice was at the center of Dr. Mora’s seminar this semester, which set out to examine ways different collective actions enact the political and produce alternative understandings of justice. Together, she and the students engaged with Black and Indigenous thought in Latin America on the topic of violence and a sense of justice. “We’ve been working as a group – rather than a vertical teacher-student relationship, but as a collective working through ideas,” Dr. Mora notes. “We came up with our own concepts that I find very enlightening and provocative. It’s been a joy, and a privilege to learn alongside the students from the Center.”

The sense of appreciation between professor and students is mutual: when Dr. Mora was introduced as the keynote speaker at the ethnography conference, a group of her students in the crowd erupted in cheers of support. “I’m very impressed with the level of engagement and analytical capacity of the students here at the Center,” she reflects. “In my class, there’s been a collective desire to push ourselves into the space of not knowing, and figuring things out through discussion and dialogue. I think it’s reflective of the scholarly commitment of the students here.”

Dr. Mora’s mentality of “porous academia” has fostered a kind of openness for listening and exchange that have made connections and invigorated ways of thinking among the faculty and student scholars at the Center, and Dr. Mora herself. As the semester wraps up, Dr. Mora will return to Mexico and her home institution, continuing fieldwork in Bahia, Brazil, embarking on a collaborative research project with Afro- Mexican and Indigenous women’s organizations in Mexico, and finishing up a book project on Ayotzinapa, the case of 43 students who were disappeared in Mexico in 2014. Though she is moving on from the Center, there are opportunities to stay connected in the future. “I’m hoping that the dialogues with the students and faculty here will continue,” she confirms. “I’d love to see if there can be collaborations between my home institution and the Center, if master’s students here want to go do the PhD with us, or we can organize virtual seminars, for example.” Undoubtedly, the quest for listening, dialogue, and connection is a cornerstone for Dr. Mora’s work, and has made a lasting mark on the Center’s community.