José Martí and Juan José Sicre: The Model and the Artist

The story behind the Center's José Martí statue.

This article first appeared in the Fall/Winter 2006 issue of the Latinamericanist. 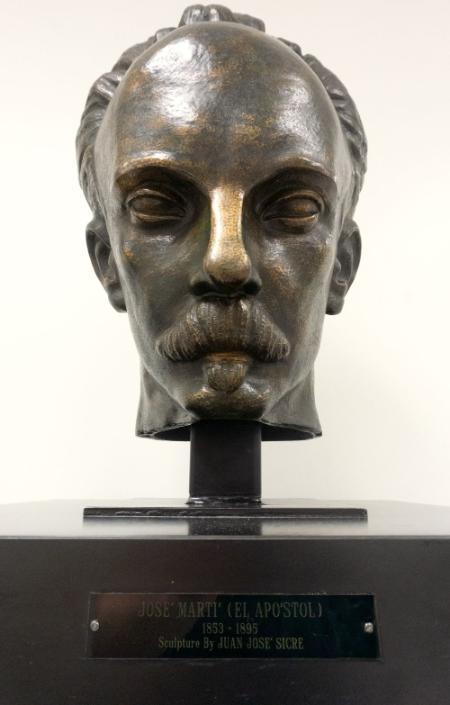 As you enter the Center for Latin American Studies, you cannot help but notice a bronze head of José Martí by the Cuban sculptor Juan José Sicre (1898-1974). This work of art came to the University of Florida in 1950 as a gift from the Alfaro Foundation. Emeterio S. Santovenia, then president of the Cuban Academy of History and an intellectual with strong ties to the Cuban political leaders of the period, presented the gift when he received an honorary degree from UF. The piece was originally housed in the Latin American Collection in the Smathers Libraries. During the Thanksgiving weekend of 1976 the statue was stolen. Two students, having played a prank, returned it to the campus police unharmed a few days later. The statue, affixed to a new, heavy base that made it very difficult to move, was transferred to the third floor of Grinter Hall where it currently stands, welcoming all visitors to the Center.

Anyone familiar with Latin American history and culture who sees the piece will immediately recognize the model – José Martí (1853-95), the founding father of the Cuban nation. A great Caribbean politician and intellectual, Martí lived his most productive years in the United States. He is recognized today as one of the intellectual fathers of Latino/a culture. But unfortunately, the artist who created this important work seems to have disappeared from the historical record. Both when the sculpture arrived at the University and when it was stolen for a few days, newspaper articles mentioned the model but not the artist. This seems unfair, since the piece is an important work by the pioneer of Cuban modern sculpture.

Juan José Sicre, who studied in Spain, Italy and France in the 1920s, was professor of sculpture at the Academia de San Alejandro in Havana, which at the time was the Cuban national school of fine arts. At the Academia, he trained many Cuban artists. By 1950, Sicre was recognized as a master in his field and was selected to create the monumental statue of Martí for the center of Plaza Cívica in Havana, now known as the Plaza de la Revolución. This monument was commisioned by the Batista government for the centenary of Martí’s birth. Sicre worked on the piece, probably his masterpiece or at least his best known work, from 1950 to 1958, when the monument was officially installed. 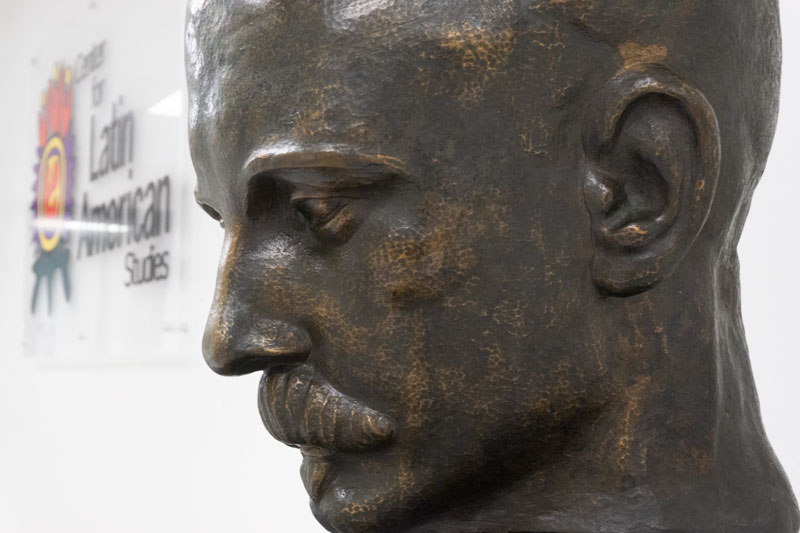 UF’s head of Martí, one of several casts, is a product of Sicre’s creative process for the Martí monument. Where are the other casts of this work of art? I have been unable to locate them. However, I do know that important museums – the National Museum in Havana and the Museum of Latin American Art in Washington, D.C., among others – have works by Sicre in their collections. Even though there is a small plaque at the base of UF’s sculpture that identifies both the model and the artist, we recognize Martí but ignore Sicre. Obviously, the model is far better known than the artist, but the next time you see the head of Martí at the entrance to the Center for Latin American Studies look at it carefully – think of the artist and think of the statue as a work of art. There is little doubt that Sicre is an artist worth knowing and admiring.