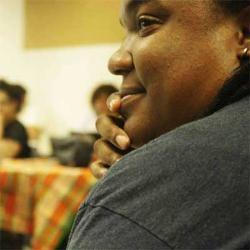 Dr. Tanya Saunders has recently been invited to be a scholar-in-residence at the Hutchins Center for African & African American Research at Harvard University for Spring 2022. Dr. Saunders is a recipient of the Mamolen Fellowship, which brings distinguished scholars in the field of Afro-Latin American Studies to the Du Bois Research Institute.

“We at the Center are so thrilled at the news that Dr. Saunders has received this prestigious fellowship,” says UF Center of Latin American Studies Director Carlos de la Torre.

The Hutchins Center is the preeminent research center in the field of African & African American research and has supported more than 300 fellows across a wide variety of disciplines since its founding in 1975. Its current director is Dr. Henry Louis Gates, Jr. It also encompasses the Afro-Latin American Research Institute, led by Dr. Alejandro de la Fuente.

“It’s such an honor,” Dr. Saunders says. “I’m so excited for the opportunity to continue my research at the Hutchins Center, and be a part of such an inspiring community of scholars.”

In 2016 Dr. Saunders was awarded the Abdias do Nascimento Award for Academic Development, in conjunction with their colleagues at the State University of Santa Caterina (UDESC) and the Pontifical Catholic University in São Paulo (PUC-SP). They are also the author of the book Cuban Underground Hip Hop: Black Thoughts, Black Revolution, Black Modernity, and a contributor to the volume No Tea: No Shade: New Writings in Black Queer Studies.

You can learn more about the Hutchins Center here.

You can learn more about Dr. Saunders here.