Distinguished colleague Efraín Barradas retired in May 2020, after working twenty years, since 2000, with the Center for Latin American Studies in a joint appointment with the Department of Romance Languages (now Spanish and Portuguese Studies). UF loses an internationally celebrated star professor with this retirement but gains an Emeritus faculty who will never wear out his welcome. 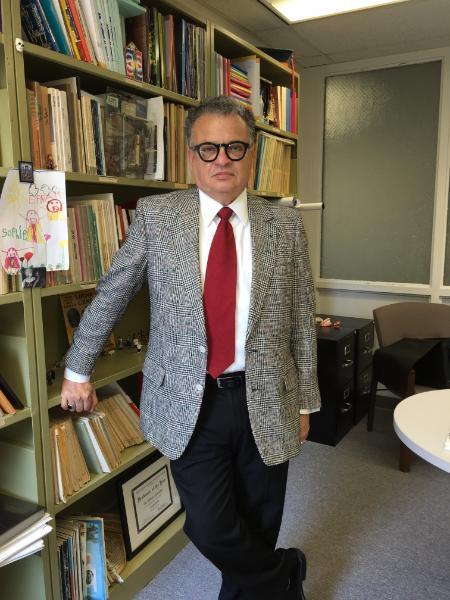 After graduating from Princeton in 1978, Dr. Barradas taught at the University of Massachusetts, Boston. He also filled visiting positions at Harvard University (from 1983 to 1984, and the spring semesters of 1990, 1991, 1992, 1995). For 14 years (1985 to 1999), Professor Barradas worked as the Chairperson of the Spanish and Portuguese department (renamed Hispanic Studies) at the University of Massachusetts, Boston. Professor Barradas wrote more than 50 articles of literary criticism, beginning in 1974. His storied career saw him publish an overflowing shelf of academic books, centering on Puerto Rican literature and branching to topics of the Caribbean and beyond. His books include criticism on Puerto Rican literature (1998), two anthologies of Puerto Rican poetry (1980, 1992), an anthology of Puerto Rican short stories (1983), two studies on the author Luis Rafael Sánchez, Para devorarte otra vez (2017) and Para leer en puertorriqueño (1981), and one on printmaker and painter Lorenzo Homar, Mente, mirada, mano (2007).

One decade after his debut in literary criticism, in 1984, Dr. Barradas published the first of what became more than a dozen articles on art criticism. He eventually authored three art catalogs: one each on Puerto Rican artists Wilfredo Chiesa (1986), Marcos Irizarry (1987), and Néstor Millán Alvarez (2002).

Over the span of his career, Barradas was a generous collaborator, with five prologues and nearly 200 book reviews to his name. In addition to his highly respected academic contributions, Professor Barradas frequently contributed cultural notes to the newspapers of Puerto Rico, and the popular press tended to return the favor by widely acknowledging his work, making him a celebrity intellectual.

Toward the end of his career, Professor Barradas began to publish his creative writing. My class read his memoir Inventario con retrato de familia (2018), a series of essays that contemplate the emotionally and materially onerous task of packing up the narrator’s parents’ home in Puerto Rico, once they are no longer able to care for themselves. Inventario con retrato de familia, along with another of Dr. Barradas’ recent books, received a glowing review in the latest number of the literary journal Chasqui.

Professor Barradas enjoyed prestigious membership on innumerable editorial and advisory boards based in Puerto Rico and the mainland. He was a tireless mentor to students and dedicated his Sundays to reading dissertation chapters. At UF alone, Professor Barradas served on 63 doctoral committees, 18 as Chair.

In the city of Gainesville, Dr. Barradas is known for his gracious hospitality at his photo-shoot-ready residence in Florida Park, where he showcases a rotating selection of Latin American and Latinx artwork drawn from a vast personal collection of professional and folkloric craft traditions. Professor Barradas lent some of those pieces, as well as signed books, to exhibitions held at the UF art museum and at the UF Latin American and Caribbean collection at the library.