The Center for Latin American studies had the opportunity to welcome back to the University of Florida Center alumnus Dr. Thomas Braman. 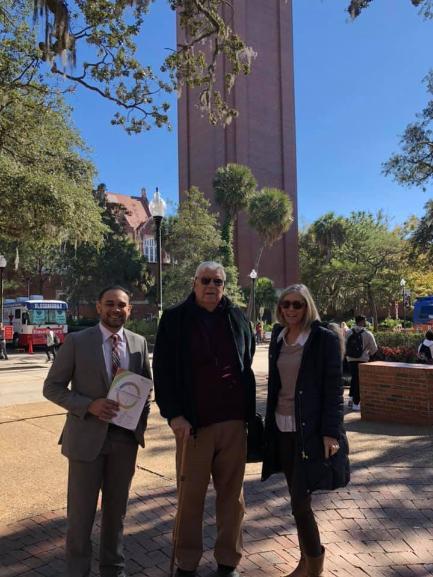 Dr. Braman graduated from UF with a Master’s Degree in Latin American Studies in 1964 and a Ph.D. in History in 1975. Braman had a career as a senior officer at the Central Intelligence Agency (CIA) before his retirement. He currently serves on the UF International Center’s Board. For the past eight years, Braman has assisted the Honors Program by interviewing applicants for the Boren Scholarship, which funds the intensive study of language and culture abroad by U.S. undergraduate or graduate students.

As a student at the Center for Latin American Studies, Dr. Braman was influenced by Dr. Lyle McAlister, who was director of the Center from 1963-1968. Dr. McAlister became Braman's dissertation chairman and after graduation recommended him for his first position in the CIA as a Chile desk analyst in the directorate of intelligence.

Braman worked for the CIA for six years before he was granted a sponsored sabbatical to return to UF to complete his Ph.D. His dissertation was titled Land and Society in Santiago de Chile 1540-1575.

After graduating, Braman returned to the CIA and served as Operations Center Chief on the President’s Daily Brief staff and served as the Directorate’s representative in Tehran during the revolution. Even after retirement, Braman continued to serve his country, working as a White House Staffer and for the next eight years, served as a trainer, analysis instructor, and military liaison officer in various countries including South Africa, Jordan, Lebanon, Egypt, Vietnam, Sri Lanka, and Iraq, where he served six tours.

Dr. Thomas Braman’s contributions not only to the University of Florida but also to the United States are to be commended. We were fortunate to reconnect with him during his visit to the university and are happy to know that his time at the Center helped shape his career.