The UF Center for Latin American Studies (LAS) created the LAS Alumni Awards in 2017 to recognize Center alumni whose achievements positively reflect the goals, principles, and philosophy of the Center. The Alumni Awards are composed of two categories the Outstanding Young Alumni Award and the Lifetime Achievement Alumni Award.

The Outstanding Young Alumni Award recognizes alumni who are 40 years of age or younger, and who possess an unmistakable tradition of achievement and a commitment to further strengthening the Latin American Studies field. The Lifetime Achievement Alumni Award recognizes alumni whose achievements over the course of several years positively reflect the goals, principles, and philosophy of the Center. Award recipients are selected annually by the LAS Alumni Board and honored during the Fall Reception.

This year’s Fall Reception took place on November 8. During the festivities, Dr. Bertrhude Albert was awarded the Outstanding Young Alumni Award and Jorge Piñon was awarded the Lifetime Achievement Award. 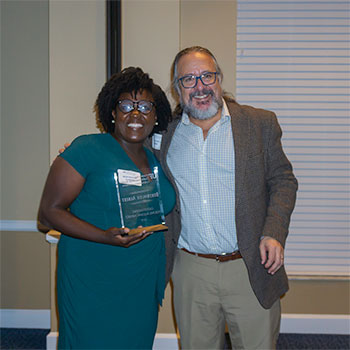 Dr. Bertrhude Albert received her MA in Latin American Studies and her Ph.D. in Agricultural Education and Communication from the University of Florida. She co-founded the nonprofit P4H Global, formerly known as Projects for Haiti. P4H Global is currently training Haitian teachers in 7 of Haiti's 10 departments and by the end of 2019, they will be operating in all 10 of Haiti's departments. Thanks to the hard work and dedication of the P4H team, over 5,000 teachers have been trained across Haiti. Albert has received numerous awards in recognition of her work, including being inducted into the UF Hall of Fame and an International Outreach Award, among others. This year, the University of Florida recognized Albert’s work by selecting her as one of the top 40 UF graduates making an impact in the world. For her exemplary work and commitment to furthering the LAS field, it is an honor to award the Center’s 2019 Outstanding Alumni Award to Dr. Bertrhude Albert. 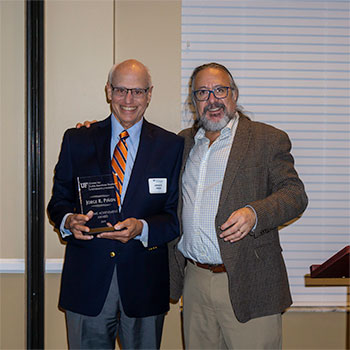 Jorge Piñon received his BA in Economics and a Certificate in Latin American Studies from the University of Florida. Piñon’s 32-year career in the energy industry began when he joined Shell Oil Company in 1975. He was appointed President and CEO of Transworld Oil USA in 1989 and President of Amoco Corporate Development Company Latin America in 1991. In 1994, he served as president of Amoco Oil de México and president of Amoco Oil Latin America. In 1997, Piñon received the "Yiacatecutli" award for distinguished service in the promotion of U.S.-Mexico business relations. Piñon is an expert on Cuba’s energy sector. He has published extensively in energy industry magazines and publications. Throughout his career, Piñon has testified before various committees of the U.S. Senate and the U.S. House of Representatives. He has also spoken in front of the U.S. International Trade Commission on issues of Latin American energy policy and related geopolitical issues. As part of his work, Piñon has presented several distinguished lectures at various institutions, include the Woodrow Wilson International Center for Scholars and the U.S. Naval Postgraduate School. Piñon has also lent his expertise and knowledge to the Center for Latin American Studies, participating as an invited speaker on several occasions as part of the Latin American Business Symposium. Because of his important contributions to the economic development and international understanding of energy and geopolitical issues in Latin America, the Center is proud to present Jorge Piñon with the 2019 Lifetime Achievement Award.