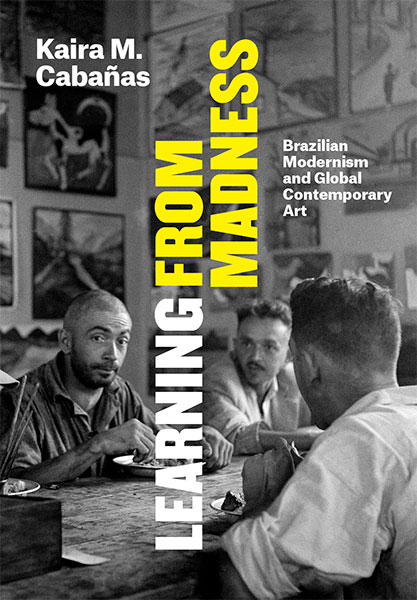 On account of this scholarly work, Yve-Alain Bois, Institute for Advanced Study, writes:

“Kaira Cabañas’s study is an efficient antidote to what she calls the ‘monolingualism of the global’—the current tendency in modern and contemporary art institutions to welcome the art of the ‘other’ but only as framed by Western cultural codes…. She focuses on the extraordinary case of Brazil, where works of art produced by psychiatric patients were given a status similar to those of professional artists…. Goethe’s motto, ‘What is inside, is outside,’ as quoted by Brazilian critic Mário Pedrosa, is the Ariadne’s thread linking the five case studies examined in this brilliant book.”

Throughout the history of European modernism, philosophers and artists have been fascinated by madness. Something different happened in Brazil, however, with the “art of the insane” that flourished within the modernist movements there. From the 1920s to the 1960s, the direction and creation of art by the mentally ill was actively encouraged by prominent figures in both medicine and art criticism, which led to a much wider appreciation among the curators of major institutions of modern art in Brazil, where pieces are included in important exhibitions and collections.

Kaira M. Cabañas shows that at the center of this advocacy stood such significant proponents as psychiatrists Osório César and Nise da Silveira, who championed treatments that included painting and drawing studios; and the art critic Mário Pedrosa, who penned Gestaltist theses on aesthetic response. Cabañas examines the lasting influence of this unique era of Brazilian modernism, and how the afterlife of this “outsider art” continues to raise important questions. How do we respect the experiences of the mad as their work is viewed through the lens of global art? Why is this art reappearing now that definitions of global contemporary art are being contested?

Learning from Madness offers an invigorating series of case studies that track the parallels between psychiatric patients’ work in Western Europe and its reception by influential artists there, to an analogous but altogether distinct situation in Brazil.

Dr. Cabañas will give a presentation of her book on November 13th, from 6-7 PM. A Q&A will follow the presentation, moderated by Dr. Rosana Resende. You can learn more about the event here!