Endangered Amazon: An Indigenous Tribe Fights Back Against Hydropower Development in the Tapajos Valley

Faced with the continuous encroachment and deforestation of their lands by pariwat (outsiders), the Munduruku have taken inspiration from a warlike past to build the movement called Ipereğ'ayũ, which translates as “We are strong. We know how to protect ourselves and all we believe in.” Ipereğ'ayũ seeks to assert the territorial rights of the Munduruku, and uses direct action to pursue its goal – to stop all infrastructure projects that threaten their lands, such as the Initiative for the Integration of the Regional Infrastructure of South America (IIRSA), an infrastructure plan proposed by the Union of South American Nations (UNASUR), in coordination with complementary projects on the part of its 12 member states. 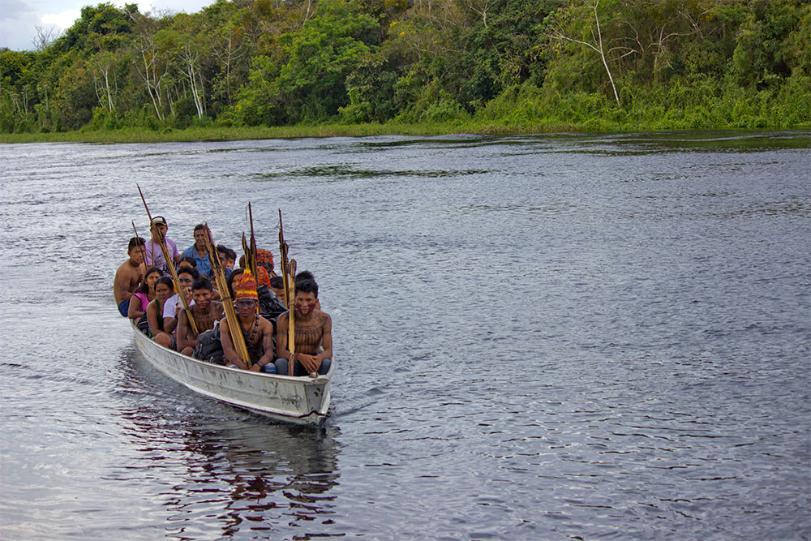 Field observations suggest that deforestation of the Amazonian forest could reach 40% due in large to the agricultural occupation of the central Amazon Basin. Such occupation would be driven by the Tapajós Hydroelectric Complex (THC) – a key element of UNASUR’s initiative – which consists of five dams projected to generate more than 12,000 megawatts, making it one of the largest hydropower facilities in the world. Deforestation of this magnitude, coupled with global climate change, could push the Amazonian forest past the point of no return.

The Tapajós Valley, where the THC project is geared to take place, is the homeland of the Munduruku, a tribe regarded as one of the most politically organized tribal groups in the Amazon. Even though the Brazilian Constitution gives the Munduruku rights to territories they have historically occupied, and to control the use of associated water bodies, the Brazilian State has nevertheless proceeded to advance the THC, which, if fully implemented, would undermine cultural and ecological conservation in the Tapajós Valley, with significant implications for the entire Amazon Basin.

“The THC would open the door to occupation of the central Amazon Basin. To date, nearly 20% of the Amazonian forest has been cleared in the arc of deforestation, much of which lies in the lower basin,” notes Dr. Walker. “If agricultural occupation of the central basin replicates what has already happened, deforestation across Amazonia will soon reach 40%. This is sufficient to produce a tipping-point transgression, with a breakdown in rainfall recycling and desiccation of Amazonia's moist forest systems.”

Through the Ipereğ'ayũ movement, the Munduruku are confronting infrastructure development with direct action, with a repertoire including non-negotiation, the occupation of construction sites and public buildings, and acts of vandalism. This resistance has enabled the Munduruku to put a stop to territorial encroachments by the Brazilian government, at least for the moment. The current weakening of environmental policy in Brazil invites the speculation that indigenous resistance, such as demonstrated by Ipereğ'ayũ, could hold an important key to conserving Amazonia's ecological and cultural riches.

Endangered Amazon: An Indigenous Tribe Fights Back Against Hydropower Development in the Tapajós Valley, is published in Environment: Science and Policy for Sustainable Development magazine. The full article may be accessed via their website on http://www.environmentmagazine.org/Archives/Back%20Issues/2018/March-April%202018/endangered-full.html. Photo credits belong to UF Geography Graduate Student Maira Irigaray Castro in collaboration with Amazon Watch, and to Dr. Robert Walker.