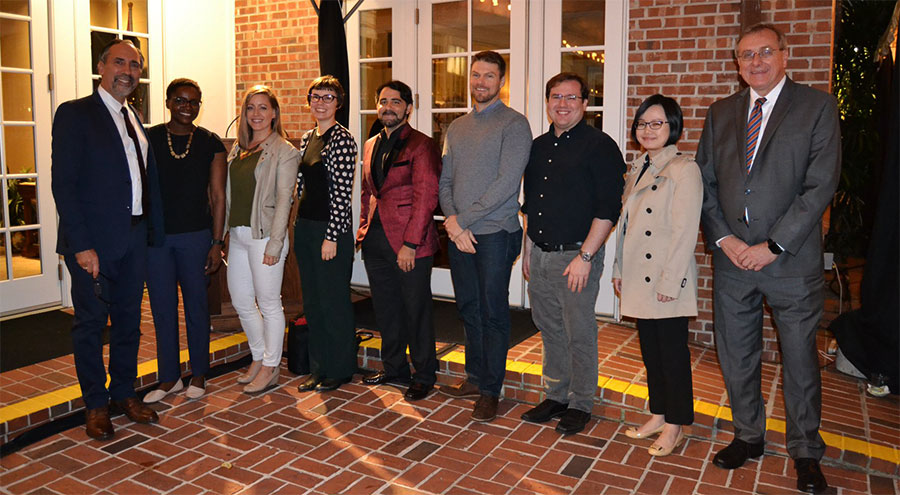 December 5, 2018 - Image: Correia (fourth from right) was announced as a 2019 Global Fellow at the UF International Center's IEW 2018 Reception.

Frontiers of environmental justice: Building a regional research program on indigenous rights and deforestation in the South American Chaco

Center for Latin American Studies faculty, Dr. Joel Correia, was named a 2019 Global Fellow by the UF International Center. The Global Fellows program helps UF faculty kick-start their international research program via a $5,000 award, which faculty can use to cover expenses to travel to collect field data, meet with international scholars, access resources not available at UF, and to support any activity that advances their research abroad.

As part of the program, Correia seeks to develop a new international research initiative that will increase the visibility of the University of Florida in Latin America. Frontiers of Environmental Justice, Correia’s research project, will investigate the intersections of environmental justice and indigenous rights in the Gran Chaco. The Gran Chaco forest is the largest forest ecosystem in Latin America after the Amazon—nearly 1.3 million km2 from southern Bolivia across western Paraguay and into northern Argentina. The goal of the research is to understand how deforestation and related environmental changes impact indigenous livelihoods in three sites that lie at the fore of deforestation across the Chaco frontier: Bolivia’s Santa Cruz Department, Argentina’s Salta Department, Paraguay’s Boquerón Department.

As a Global Fellow, Correia will travel to Argentina, Bolivia, and Paraguay in June 2019 to meet with potential collaborators who are working at the nexus of indigenous livelihoods and environmental change in the Gran Chaco. During the trip, Correia will assess potential research sites, meet with collaborators in academic and non-governmental sectors, and begin conversations with affected indigenous communities to understand their interests in future research. A goal of the broader research project is to identify how affected communities and their allies are confronting environmental injustices caused by frontier deforestation and to form an action-oriented network across the Chaco to support those efforts through community-based participatory research. The Global Fellows program will aide Correia in this initiative by providing him with a platform to expand his existing network of research collaborators in Latin America and identify potential collaborators across the UF campus.

Frontiers of Environmental Justice builds from the Center for Latin American Studies strengths in social and environmental justice research and will strengthen the Tropical Conservation and Development Program’s initiatives in the Gran Chaco region of South America.