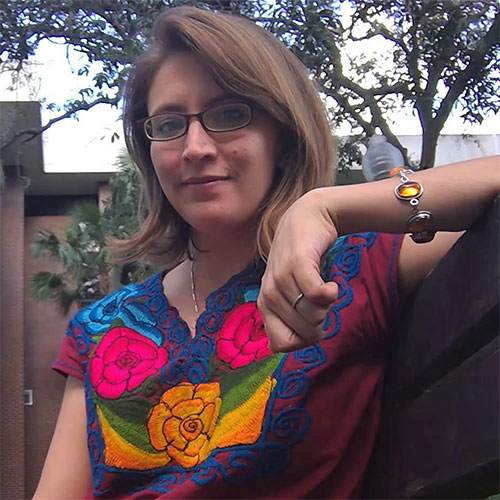 Dr. Evelyn Maria Dean-Olmsted is a linguistic anthropologist who studies language, power and social identity in Latin America. Since 2013, she has served as Assistant Professor of Anthropology in the Department of Sociology and Anthropology at the University of Puerto Rico, Río Piedras. Her current book project (To be Mexican, Jewish and Arab: The Pragmatics of Diaspora), is an ethnography of language in everyday life among young Syrio-Lebanese Jews in Mexico City, where she has conducted fieldwork since 2006. She analyzes audio and video recordings of verbal interactions across social diverse social contexts, toward understanding how young people occupy, perpetuate and transform diasporic subjectivities into the 21st century. She has published her research in the journals Language and Communication, Diversidad Cultural, and Anthropological Quarterly. With Susana Skura of the Universidad de Buenos Aires, Dean-Olmsted has co-authored chapters on the Spanish of contemporary Jewish Latin Americans (Brill 2016 and De Gruyter Mouton 2018). In the past year, she has begun fieldwork and writing on the small but diverse Jewish communities in Puerto Rico. This includes work with converts to Judaism, many of whom embrace Jewish identities because of possible Crypto-Jewish heritage. In this, she is collaborating with fellow UPR anthropologist Juan Caraballo-Resto on a comparative project that includes converts to Islam.

While at UF, Dr. Dean-Olmsted will utilize the resources of the Latin American and Caribbean Collection and the Isser and Rae Price Library of Judaica as she prepares her book manuscript. She is looking forward to meeting students and faculty who share her interests. She can be reached at evelyn.dean@upr.edu for appointments; her temporary office is 204 Walker Hall.