New Discoveries in the Forests of Guyana 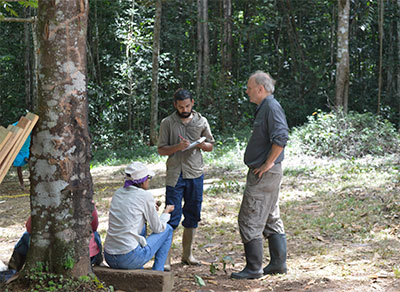 NEW DISCOVERIES IN THE FORESTS OF GUYANA – A group of researchers from the University of Guyana emerged from the forest south of Mabura Hill with several new and noteworthy scientific discoveries. The team of nine women and three men investigated various aspects of mixed greenheart forest ecology and management. They studied palm regeneration in logged areas, tree crown growth in response to forest gaps, and seedlings of greenheart, Guyana’s most important commercial timber tree species.

The finding made by the Guyana Rainforest Research Rally (GRRR) that is likely to have the largest global impression concerns the long-term impacts of future crop tree liberation from competition. The team, led by Sherica Isaacs, discovered that the treatment, which was applied in 1996, is still benefiting greenheart, crabwood, baromalli, and other valuable timber tree species. Foresters formerly assumed that the benefits diminish after only 5-10 years, but none of the previous studies on this topic had anywhere near the 21-year record available to the GRRR team.

When asked how she felt about this discovery, Sherica said,

"When I joined the GRRR just 2 weeks ago, I was focused on fish and had no idea that trees are so fascinating – I am happy that we were able to make discoveries that can help to maintain the commercial and environmental values of our lovely forests."

The research expedition is part of an ongoing collaboration to build in-country capacity for natural resource management between the University of Guyana and the University of Florida (UF) with support from World Wildlife Fund Guianas program (WWF) through the Norwegian Aid Agency (NORAD). The research expedition was led by Dr. Francis E. Putz, and his former graduate student, Dr. Anand Roopsind. Dr. Putz is an affiliate faculty member at the Tropical Conservation and Development program located in the UF Center for Latin American Studies, as well as a Distinguished Professor of Biology and Forestry at the University of Florida.

Over the past three decades, Dr. Putz actively promoted science-based approaches to pedagogy at UF and around the world. This was his second visit to Guyana. In regards to GRRR’s accomplishments, Dr. Putz said,

“I am astounded by the accomplishments of the research team under what were often physically very challenging conditions. It’s wonderful to have Guyanese researchers making discoveries about Guyana’s forests.”