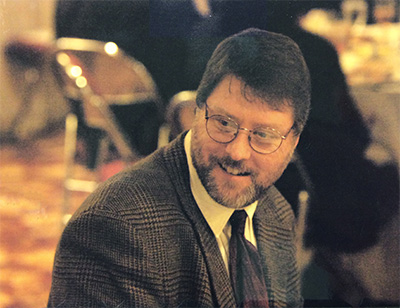 Richmond F. Brown, the Center’s former Associate Director for Academic Programs, died peacefully at Haven Hospice on September 20th, just three weeks short of his fifty-fifth birthday, after a long and very brave struggle with cancer. Born on October 14, 1961, in Fort Benning, Georgia, where his father was stationed in the army, he grew up and lived much of his life in Mobile, Alabama, a city he loved and knew well. He graduated from Davidson High School in Mobile in 1980 and summa cum laude from Spring Hill College in 1983. Disturbed by the violence and devastation in Central America in those years, he decided to study the history of Guatemala and Central America at Tulane University, earning his master's degree in 1986 and his doctorate in 1993.

He taught Latin American history at the University of South Alabama from 1990 to 2006 before becoming Associate Director for Academic Programs and Student Affairs at the UF Center for Latin American Studies in 2006, serving in that position until shortly before his death. Under his superb leadership, the MA program in Latin American Studies (MALAS) became a nationally-ranked program in terms of the quality of students, the coherence of the curriculum, and the support services for our students. During his tenure, Richmond oversaw an exhaustive review of the MALAS program and instituted a number of changes, including the consolidation of the degree specializations and the introduction of the new internship option. He also helped to promote and grow significantly our certificate and minor programs at both the undergraduate and graduate levels.

He was an exemplary scholar and teacher and a mentor to many students. He will be remembered for his kindness, decency, lack of pretension, integrity, sharp intellect, and quiet sense of humor. He had a deep knowledge of history and sports and loved music, Alabama football (although he found room in his heart for the Gators), and his cat Sooky. All of us who love Richmond say goodbye with heavy hearts, even as we treasure our memories of this extraordinary man who gave so much to so many and never thought of himself as extraordinary. We should have had him in our lives for much longer.

As a way of honoring Richmond’s memory, the UF Center for Latin American Studies has established the Richmond F. Brown Graduate Student Fund. The fund will support master’s degree students in the Center for Latin American Studies – with a preference for students pursuing internships. Checks should be made payable to UF Foundation, Inc. (Indicate in the memo line “Fund 020871”) and send to: