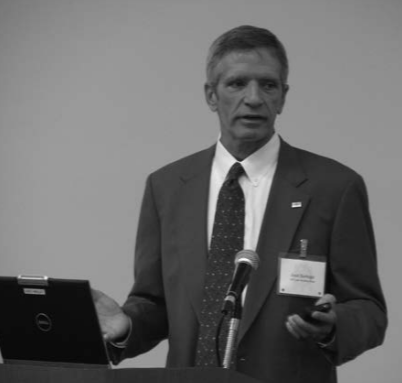 In this interview, we highlight the career of José Sariego, senior vice-president and general counsel of HBO Latin America. Headquartered in South Florida, HBO Latin America has regional offices in Caracas, Mexico City, Buenos Aires, and Sao Paulo. José received his BS in Journalism with a certificate in Latin American Studies in 1977. He serves as President of the Steering Committee of the LAS Alumni Board.

What do you enjoy most about your job?

People will find this a little crazy, but I really enjoy working with documents. I sense myself a writer and my major at UF was journalism. I also really enjoy talking to our business people and trying to understand what it is that they want to accomplish, and reflect that into a document that they can understand and read. Most legal documents are very boring, complicated, and difficult to read. If I can make them a little bit more understandable, a little bit more logical, then I had a good day. The other thing that I do is just help people. I am a problem-solver. No one likes to talk to lawyers, unless you have a problem. When you solve someone’s problem and they are really appreciative, that makes my day.

How does one start a career in the field of media and entertainment in Latin America? What would be your advice?

First, you have to have a good background in Latin America. Assuming you want to work for an HBO or other US company, you have to know about Latin America, not only media in Latin America. You have to travel, spend time there, know the culture, the people, the politics, history, economy and that is one reason the Center for Latin American Studies has been so helpful for me. My advice would be that, first, you have to be well prepared, and the Center and UF helped me prepare for many things: helped me become a better communicator, a good listener, and broadened my horizons and perspectives on the world. You have to be lucky, and I have been very lucky in my lifetime. You have to have good mentors; people who take an interest in you and you have to seek them out. It is very important to have sponsors in your career. You have to be atrevido, aggressive and assertive with your own career. And the last thing I would say, and I learned this at UF and I practiced that for my entire career, is that you have to network. You have to stay in touch and reach out to the people who have helped you and you have to help others. Networking is the way to get ahead in the world in general, and in the business world in particular. Many times it’s who you know, who you helped and how other people have helped you that really matters.

How did the University of Florida and the Center help prepare you for your career?

When I started I had no idea I was going to even be a lawyer, much less a lawyer for a company operating in Latin America. Because of my background – I’m Cuban, I was born in Cuba – and because I speak Spanish, Latin America was a natural interest. I learned a lot about Latin America at the Center. Of course that is no substitute for traveling or knowing people directly, but the UF experience opened up the door. First thing, it provided me the knowledge that not all Latin America is the same. Brazilians are very different from Argentines, Mexicans, or Venezuelans, and you have to appreciate that to do business in Latin America. Otherwise, you are going to get into a lot of trouble. These kinds of cultural differences make the region fascinating, and knowing them gives you an advantage over someone who doesn’t have that kind of background. I spend a lot of time explaining Latin America to US executives and other lawyers at HBO domestic and elsewhere, and sometimes it is hard for them to understand some of the things that happen in Latin America. That’s part of my job; I do a lot of cultural translating.

Do you have any memories or interesting stories that you would like to share about your time at the Center or UF?

Florida was a very different university when I was there. I joke that I probably couldn’t get in today. The standards have greatly improved. UF was a big party school when I went there, and although it still has some reputation for that, I think it has improved dramatically in the academic environment. When I went back after many years, I was amazed with the seriousness of the students. Then as now, college is a good time, it is the best time of your life, but at the same time is the foundation of everything you are going to do in your future. Grades are important, but not as much as learning how to think for yourself and expanding your universe, being open to new cultures, environments and ways of thinking. If you can come out of college with that then you’re well prepared to handle the world.